‘Roc de l’Abbaye represents the quintessence of the Silex terroir’

The Domaine Roc de l’Abbaye is located at the foot of the ‘Clos du Roc’ parcel in Saint- Satur.

Saint Satur is a Christian martyr who died in Carthage in 203. The Archbishop of Bourges, Raoul de Turenne, transferred the relics of Saint Satur to Saint Pierre’s church in the village of Gordon. The village will henceforth bear the name of Saint-Satur.

The Countess Mathilde, Lord of the village, established the Abbey of Saint-Satur, to accommodate regular canon of Augustinians

It is the end of the 100 Years’ War. 30 years after having been destroyed by the English, the Abbey of Saint-Satur founds Domaine du Clos du Roc, 4 hectares of flint (Silex) terroir, facing full South, which is considered as the cradle of the Sancerre appellation. Seven years earlier, Nicolas Rollin and Guigone de Salins created the Hospices de Beaune in Burgundy. In 1463, François Villon, famous French medieval poet, came to the Abbey of Saint-Satur and drank wine from the Clos du Roc vines.

In the winemaking hamlet of Boisgibault, in Tracy-sur-Loire in the Pouilly-Fumé appellation, a winemaker and Countryside warden, André Mollet, was already harvesting Blanc Fumé (former name of Sauvignon Blanc) and Chasselas.

At the end of the 19th century, Phylloxera destroyed most French vineyards. A winemaker and railway employee, Alexandre Mollet, replanted the family estate in Tracy-sur-Loire and became the mayor of the village (1908-1920).

On his return from Germany, where he was held prisoner, Paul Mollet, Florian’s paternal grandfather, founded with other winegrowers of the Pouilly-Fumé appellation, the Cave Coopérative de Pouilly-sur-Loire. He remained its director until 1970 while continuing to run the family estate. Paul Mollet was the mayor of Tracy-sur-Loire from 1971 to 1977.

Florian, Jean-Paul’s son, started managing the family’s estate and continuing his father’s hard work. Credited for his talent in winemaking, Florian built a modern cellar next to the Clos du Roc parcel and successfully enlarged the family estate up to 17ha. Thanks to his expertise in France and abroad (Australia, South-Africa…) combined with his profound knowledge of flint (Silex) terroir, his wines have become the reference for epicureans in search for freshness, chiselled minerality, and refined aromas.

Until today, Saint-Satur is famous for its ancient Abbey and its flint terroir on the hillsides bordering the Loire river. Domaine Roc de l’Abbaye, managed by the Mollet family, continues to cultivate the iconic ‘Clos du Roc’ parcel as well as some finest examples of flint (Silex) terroirs of the region.

The Domaine Roc de l’Abbaye is one of the rare Sancerre estates with all of its parcels planted on the flint (Silex) Terroir. This represents only 15% of the vineyards of Sancerre. It is the most sought-after terroir because it produces wines with a ‘taut’ profile, with ‘gunflint’ aromas, a strong ‘minerality’ combined with finesse and power.

A bit of geology…

Our cellar is located a few hundred meters East of the ‘Sancerre fault’ which is a major geological event occurred some 360MYA at the end of the Devonian and at the beginning of the Carboniferous (Paleozoic Era).

It is the result of a major tectonic event that crossed France following a North-South axis by which the land moved away, creating pits and depressions. This explains the structure of the Loire area. Geologists estimate that the Sancerre fault has a vertical displacement of 100-150 meters and extends to the Massif Central (a highland region in the middle of Southern France).

The Sancerre fault is also at the origin of the alignment of the hills of Sancerre, St-Satur and the Orme aux Loups. The peaks and slopes of our flint clay hills are more recent, only 50 to 30MYA. They have at their upper part a conglomerate of white siliceous cement containing flint. The Western slopes of the hills have white or grey flint, sometimes black, as we find at the Roc de l’Abbaye.

‘The flint terroir gives a unique personality to the wines of the estate.’

Our 11.5ha vineyard in the Sancerre appellation is made up of 12 parcels (see the interactive map below) spread over 5 towns ; Bannay, Ménétréol, Saint-Satur, Sancerre and Thauvenay with a flint terroir. The vineyard is planted with Sauvignon Blanc on 10ha and with Pinot Noir on 1.5ha.

The plot of parcels with Pouilly-Fumé is located near the wine-growing hamlet of Boisgibault (which is part of Tracy sur Loire) where the Mollet family comes from. The entire vineyard of 6ha is planted with Sauvignon Blanc grapes. 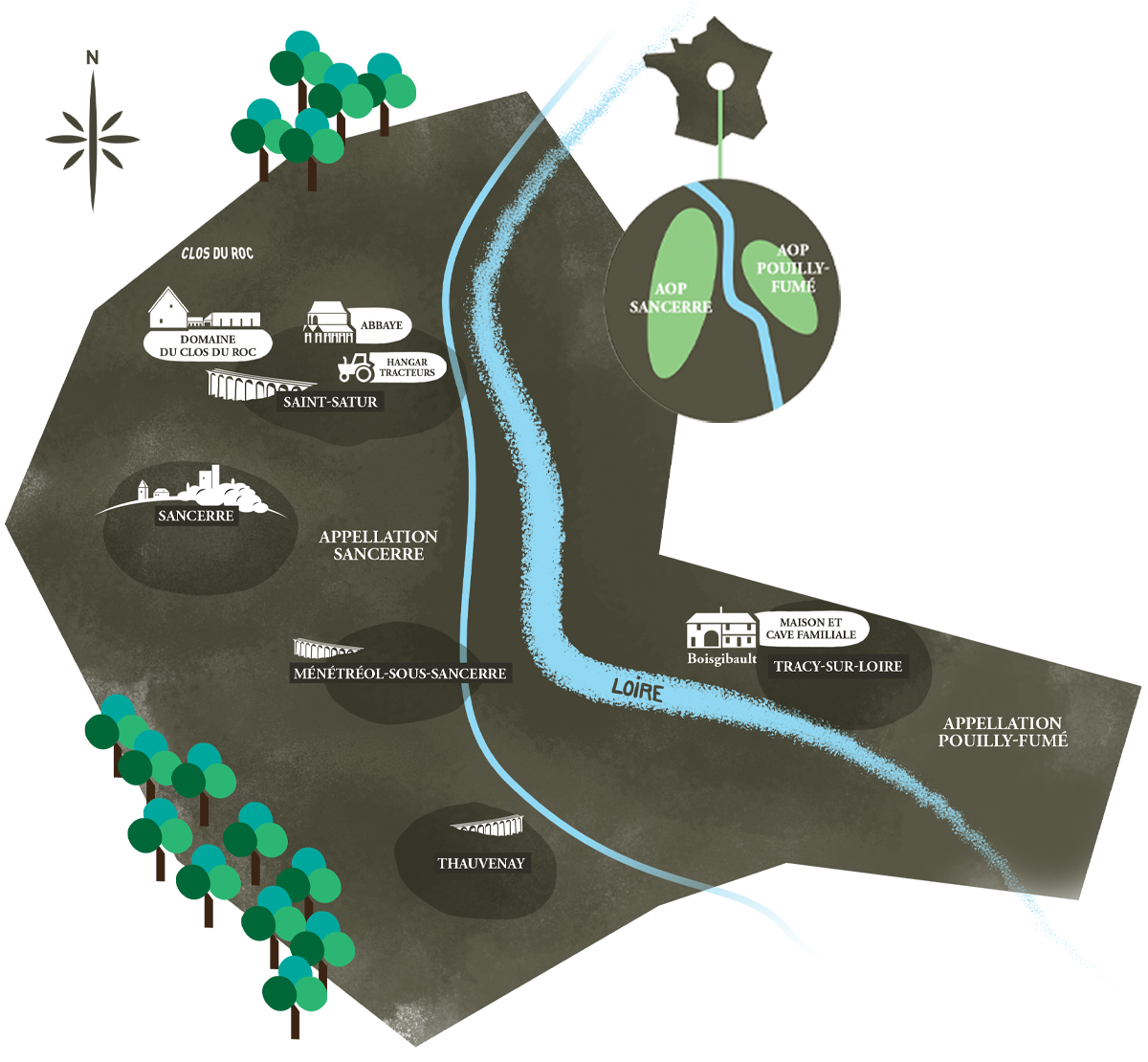 Track our parcels in Sancerre & Pouilly-sur-Loire

Move your mouse over the interactive map

Curetage is a curative practice for vines showing wood disease symptoms. It involves removing the tinder woods (yellow & soft woods) with a small saw, so that the affected vines can survive and continue to grow in the following years.

On average ~6000 vines of Clos du Roc are cured every year and this practice allows us to ensure the sustainability of our old vines.

Passionate about viticulture and winemaking, Florian with the help of his parents Jean-Paul and Marie-Rose undertook the construction of a modern cellar on the historic site of the Domaine Roc de l’Abbaye at the heart of Saint-Satur in 2000.

Made of multiple small stainless-steel tanks in order to vinify each parcel separately, it became a functional cellar which allows the best of each parcel to be revealed.

The best cuvées marketed as the ANTIQUE range, as well as our cuvée Parcellaire, our single vineyard wines Roc de L’Abbaye, are aged in barrels of 228 litres in vaulted cellars built in the 17th century.

Discover our range of Sancerre and Pouilly-Fumé wines. We offer the cuvée PARCELLAIRE with its legendary finesse, our cuvées ANTIQUES which are more concentrated and intense, and our cuvées TRADITIONS which reveal the purity of the Silex terroir. Our estate wines are expanded by a selection of Loire appellation wines vinified by Florian for your ultimate joy!

Find the list of articles and awards won by the Domaine throughout the years.

We use cookies to allow us to better understand how the site is used. By continuing to use this site, you accept this policy.